An EndNote library is not a single file. It is a set of files, many of them frequently updated as you work, and these files must be updated in a strict sequence by EndNote to avoid corruption of the library. This can cause difficulties when sharing libraries because only EndNote can properly control the sequence for updating and saving of data in the library, and outside synchronization or file management services can actually damage EndNote libraries. This module covers some of the methods to avoid, and then talks about safer methods of sharing references or complete libraries.

Never store an EndNote working library on any cloud service for sharing, or even just for your own use on multiple computers. This will eventually lead to library corruption because of the way the cloud services synchronize files over the Internet. Such unusable cloud services would include, but are not limited to—

Also, never store a working library on a flash drive.
The reason these methods are inadvisable is that when you are working in EndNote, it is saving data to multiple files, and the data must be saved in a set sequence, as described above. When cloud services transfer that data, they may change the sequence of file saves. This eventually leads to library corruption. The library may appear to be fine for days, weeks, or even months, but will eventually be corrupted.

EndNote libraries with read-write access should not be stored on network drives. We have seen corruption problems with libraries on network drives as well as general performance issues. Ideally, the library should be kept on the owner’s computer. If you must keep a library with read-write access on a network drive, we suggest you make frequent backups of the library using the File--Compressed Library command for libraries smaller than 5G or the File--Save A Copy command for larger libraries.

Sending the .enl File for a Library When Sharing a Library

Every EndNote library is made up of two parts: the .enl file and the .data folder. It may be helpful to think of the .enl file as just the interface file for working with the contents of the .data folder, where all the real data is kept. When you open a .enl file, EndNote searches for the matching .data folder and refreshes the screen with the latest information in a sort of “snapshot.” If the .data folder is removed, EndNote will create a new one with data to match the last “snapshot” because it must have a .data folder to work. However, that new .data folder would not contain any of the attachments, group structure, or term lists from the original library; it would contain only the reference data. If you send somebody the .enl file only, they will receive only a portion of the library.

If you have not already synced your EndNote desktop and online libraries, click the Sync button to sync for the first time. (Note that you may be asked if you want to create a compressed library as a backup if it is the first time the library has been synced on that computer. We strongly suggest making a backup before the first sync. The following video will show you how to create an online EndNote account and sync your Web library with your desktop library.

What is EndNote Web?

EndNote Web is a Web-based service designed to help students and researchers through the process of writing a research paper.

EndNote now includes your own EndNote Web account so you can collaborate with colleagues and students easily. Using EndNote and EndNote Web you can:

You also send a compressed library through e-mail, burn it to disk, or put it on a flash drive or on a shared cloud service. This method allows you to control exactly which groups of references are included, and whether or not attachments are included.
The disadvantage of this method is that users are not working with the same copy of the library. Each person would have their own copy of the library and changes to references could be made in each copy differently.

With the EndNote library you want to compress open in EndNote, select Compressed Library from the File menu. You should then see the screen below, which you saw earlier in this chapter, but because you are not making a complete backup copy this time you can limit the references to only those you want to send. 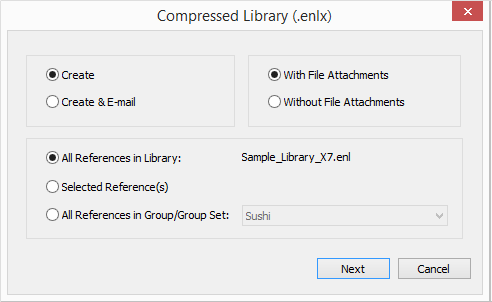 Using the Traveling Library to Create Bibliographies in Shared Documents

Select the EndNote library to import the references to, or create a new library. EndNote will filter out duplicate references that came from the library you select. 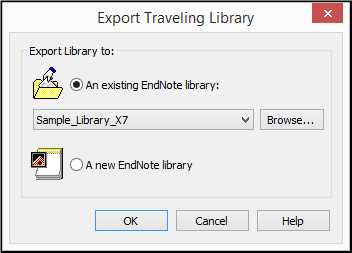 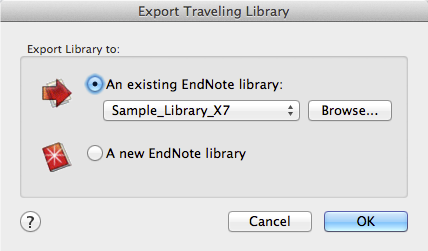 For large documents with many references, it may take some time for all the references to be exported, so be patient. EndNote will show a confirmation message when the export is complete.

In the Word document, use the Update Citations and Bibliography command to update the citations in the paper from the new records in the open EndNote library.